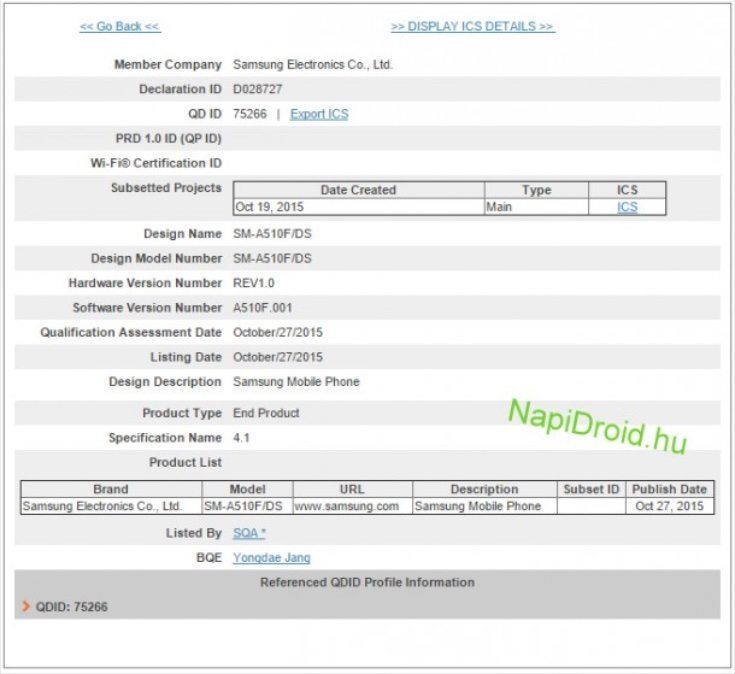 Signs are hotting up nicely that we shall soon see the next-generation versions of the Samsung Galaxy A3, A5 and A7. The Samsung Galaxy A5 2nd gen prospect has turned up in a new sighting, signifying the launch is getting closer.

A week ago we reported that two Samsung handsets bearing model numbers SM-A310F and SM-A510F had shown up on an Indian import/export site for testing purposes. These are widely thought to be the new Samsung Galaxy A3 and Galaxy A5, as the original versions of the phones had model numbers SM-A300 and SM-A500 respectively.

Now the potential Samsung Galaxy A5 2nd gen has re-emerged, this time at the Bluetooth SIG (Special Interest Group). The Samsung SM-A510F has received Bluetooth certification, and when we start seeing new devices turn up for certification purposes it usually signifies that it’s another step nearer to its eventual release.

At the moment not much is known about specs for this potential Samsung Galaxy A5 2nd gen model. However, the certification reveals that the device will support Bluetooth version 4.1 and the previous sighting of the SM-A510F disclosed a 5.2-inch display, larger than the 5-inch screen on the original A5.

Interestingly a couple of days ago we saw the upcoming new version of the Samsung Galaxy A3 appear in a benchmark database. This gave quite a few of the specs for the device. Along with this a benchmark listing also appeared for what is likely to be the next-gen Samsung Galaxy A7, also revealing some specs.

Hopefully it won’t be too much longer until we see the Samsung Galaxy A5 2nd gen in further leaks, and of course we’ll be here with the news as it happens. Are you pleased to hear that a new Samsung Galaxy A5 looks to be on the way? Maybe you own the original version and would like to have the successor? Let us know by sending in your comments.