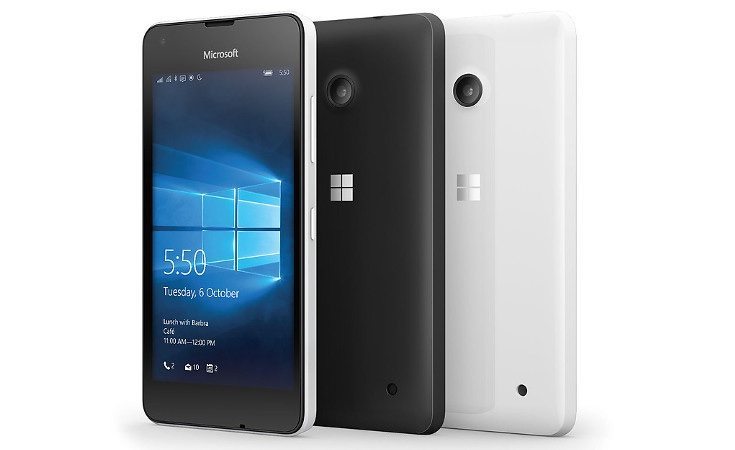 Back in October Microsoft unveiled the high-end Lumia 950 and Lumia 950 XL along with the entry-level Lumia 550. It was announced that the Lumia 550 would release in December, but although pre-orders are already available from Microsoft in the UK for the Lumia 950 and XL version, they are not yet open for the 550. Now though we can tell you about Lumia 550 UK price and pre-orders at Carphone Warehouse.

The giant phone retailer has pre-orders for the phone available, and the unlocked SIM free Lumia 550 UK price at Carphone Warehouse is just Â£89.99. It’s offered in white or black colour choices with the retailer pointing out that the white option is only available from them. You’ll get free delivery of the phone, which is expected to be by December 8th.

If you’d rather buy the Lumia 550 on contract there are a variety of pay monthly plans available with tariffs on EE, Vodafone, iD, and O2 from Â£7.50 monthly. For example one of the iD plans involves no upfront cost and then 24 monthly payments of Â£9.50. For that you’ll get 300 UK minutes, 5,000 UK texts, and 500MB of 4G data per month. Another example is with Vodafone where no upfront cost and Â£30 monthly payments for 24-months will get you unlimited UK minutes and texts and 2GB of 4G data per month.

Many more plans are available and you can check them out at the Carphone Warehouse source below. Lumia 550 specs include a 1.1GHz quad-core processor, a 4.7-inch display with HD resolution of 1280 x 720, 1GB of RAM, and a 2100 mAh battery. It’s the first budget phone to release running Windows 10 Mobile. If you want to see more about it you might like to see our specs breakdown of it against the Lumia 640.

What are your thoughts about the Lumia 550 UK price at Carphone Warehouse? Maybe you’re about to place a pre-order for it? Drop us your comments in the box below.