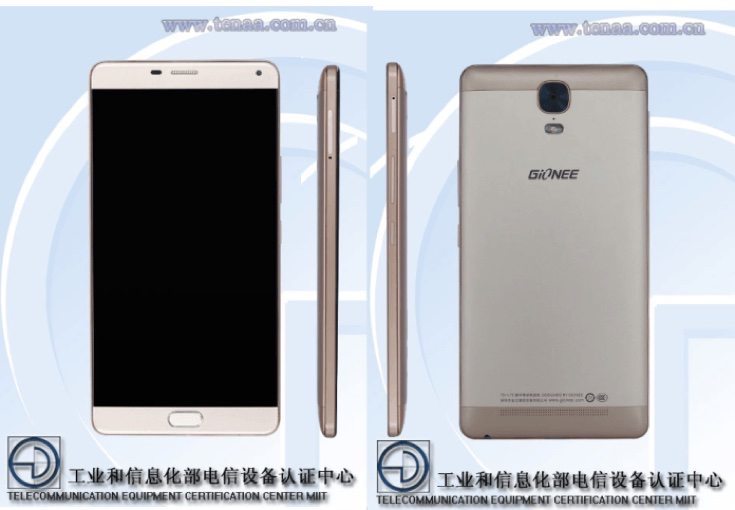 The Gionee Marathon M5 released last month and just yesterday we reported on the new M5 Lite. The company has already announced that an M5 Plus will launch on December 21, and now some new Gionee M5 Plus details have surfaced in a report out of China.

In mid-November a Gionee phone with model number GN8001 turned up at Chinese regulatory authority TENAA for certification, and it’s widely thought that this is the M5 Plus. Specs in the documentation showed the GN8001 as a phablet with a 1.3GHz octa-core processor, 6-inch AMOLED Full HD display with 2.5D glass, 3GB of RAM, and 32GB and 64GB models for internal storage (expandable to 128GB with microSD).

Further specs of the dual SIM GN8001 are thought to include an 8 or 13-megapixel rear camera with autofocus and LED flash, and a 5-megapixel front-facing snapper. Connectivity is catered for with 4G LTE, 3G, WiFi 802.11 b/g/n, Bluetooth 4.0, GPS, and USB OTG. It was running the Android 5.1 Lollipop OS with Gionee’s Amigo UI for its TENAA appearance, and has a rumored battery size of 5020 mAh.

Now a new report adds a few more of the finer details. For starters the Gionee M5 Plus is said to have a fingerprint sensor incorporated within the Home button. The phone is also reported to be just 3.5mm thick at its slimmest spot. The TENAA sighting of the GN8001 showed a measurement of 8.2mm thick at its thickest point.

The latest news also tips that the M5 Plus will feature dual fast charging. Given the latest info it appears that there’s plenty to look forward to with the Gionee M5 Plus. We hope to be able to give you full details on pricing, availability, and confirmed specs when the device is launched later this month.

Are you a prospective buyer for this upcoming Gionee smartphone? We always appreciate your comments so do send them in.