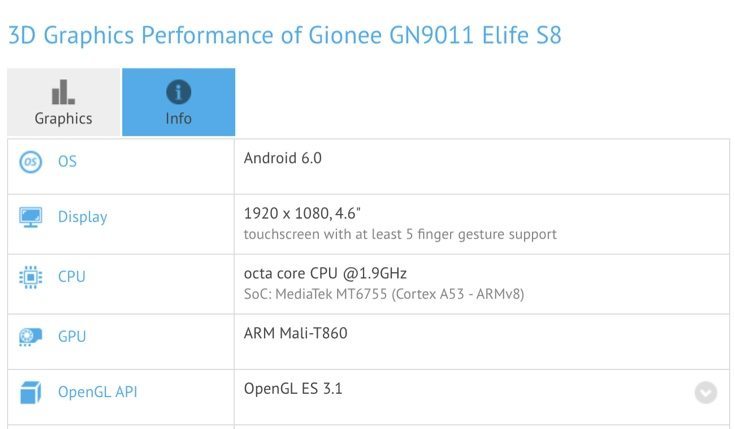 We already know that we will be officially introduced to a swathe of new devices at MWC 2016 in late February, including the LG G5 and Samsung Galaxy S7. Gionee has also announced that the Elife S8 will launch during the event, and following an earlier benchmark spot the Gionee Elife S8 specs have been reaffirmed by a new benchmark appearance.

In late January Gionee confirmed that the Elife S8 would be officially unveiled on February 22. At that time the company highlighted its camera experience and that it would have a pressure sensitive display. Earlier this month we saw a Geekbench benchmark listing for a Gionee device with model number GN9011. That gave us a few specs but at that time the final name of this device was unclear.

The new benchmark spot is from GFXBench and again gives some specifications of the Gionee GN9011. However, this time around the phone is actually named as the Elife S8 and additional specs are detailed. Specs disclosed from the filing include a 1.9GHz MediaTek MT6755 octa-core processor, Mali-T860 graphics, and a 4.6-inch display with Full HD resolution of 1920 x 1080. It has 4GB of RAM and 64GB of internal storage.

Further Gionee Elife S8 specs in the listing are a 16-megapixel rear camera with autofocus and LED flash, and an 8-megapixel front-facing shooter. Connectivity for the single SIM handset includes WiFi, Bluetooth, and GPS. The phone was running the Android 6.0 Marshmallow operating system during testing.

We’ll stress that until Gionee actually announces the Elife S8 we should treat these specs as unconfirmed. However, benchmark leaks are very often accurate and all the signs are pointing to the Gionee Elife S8 being a very decent flagship. We’ll bring all the official confirmed specs and more once the device is announced on February 22. Are you keen to see the Gionee Elife S8 made official?