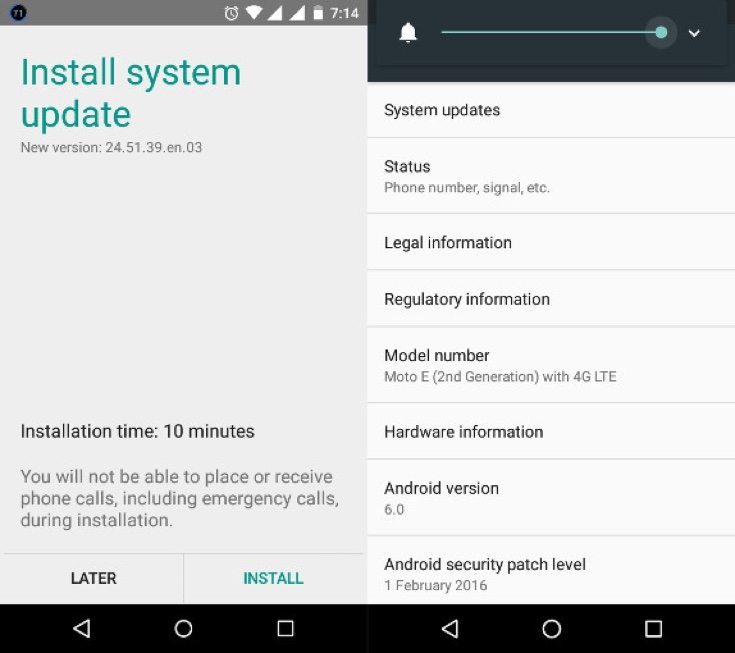 It’s always pleasurable to inform readers that Android upgrades have started to roll out for their devices. If you have the 2nd generation Motorola Moto E (2015) and have been waiting for the Android 6.0 Marshmallow update, you might be interested in this latest news. The Moto E 2nd gen Marshmallow update for the 4G LTE phone is now arriving for India, and this is very welcome news.

Over the last few months we’ve seen the Android Marshmallow update release in India for several Motorola devices. These include the Moto X Style, Moto X Play, Moto G 3rd gen, Moto G Turbo, and recently the Moto G 2nd gen. Some readers may remember that when Motorola issued a list of devices that would receive Marshmallow back in October last year, the Moto E 2nd gen was notably absent. That caused some consternation at the time although we later heard that the update would arrive for this handset at some point.

Now it’s reported that the 4G Moto E 2nd gen Marshmallow update has started to appear for some units of the device in India. This phone launched last year running Android 5.0 Lollipop, and soon after was updated to Android 5.1 Lollipop. In September the Moto E 2nd gen also received security patches for the Stagefright exploit. It has seemed a long wait but at last Marshmallow is here.

The Android 6.0 Marshmallow update brings multiple improvements and new features as well as performance optimizations. The Moto E 2nd gen Marshmallow update also includes the January 2016 Android security update. The OTA (over-the-air) update will bring your Moto E 2nd gen 4G device to v24.51.39. As usual we’ll point out that update can take several days to roll out, so if you haven’t yet received notification to your phone you may need to be a little patient.

Do you have the Moto E (2015) 4G in India? If so have you been fortunate enough to have received the Moto E 2nd gen Marshmallow update already? Let us know what you think of the changes it brings to your device.