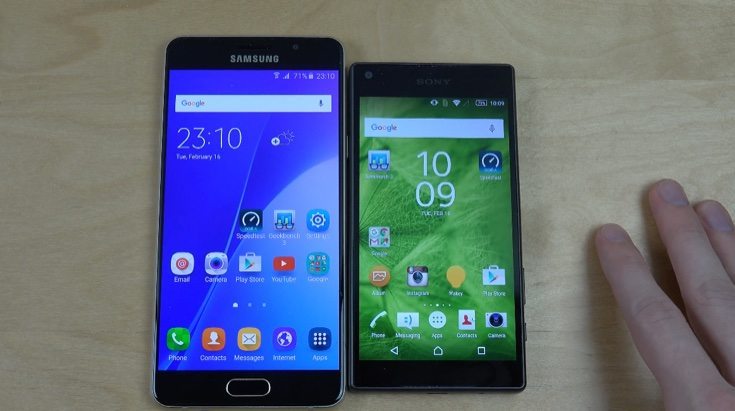 It can often be interesting to check out different aspects of smartphones and how they compare with each other. With this in mind we’re looking at the Samsung Galaxy A5 (2016) vs Sony Xperia Z5 Compact in speed testing. These handsets both have plenty to offer, so let’s see how they stand up against each other in this respect.

The Sony Xperia Z5 Compact released in October as part of Sony’s new Z5 flagship lineup, and although it’s a smaller version of the regular Xperia Z5 it still has very decent specs. The Samsung Galaxy A5 (2016) was introduced alongside the Galaxy A3 and A7 2016 models in December, and these phones are releasing to various markets.

As far as performance is concerned the Galaxy A5 2nd gen is powered by a Snapdragon 615 or Exynos 7580 octa-core processor (models vary). It has Adreno 405 or Mali-T720MP2 graphics respectively, and has 2GB of RAM. The Sony Xperia Z5 Compact packs a Snapdragon 810 octa-core processor (four cores at 2GHz and four at 1.5GHz) with Adreno 430 graphics, and 2GB of RAM. Both released running the Android 5.1.1 Lollipop operating system and are in a similar price sector.

Given the specs the speeds of each should certainly be impressive enough, and that’s what the video below aims to find out. It shows various Samsung Galaxy A5 (2016) vs Sony Xperia Z5 Compact speed tests to see which one comes out on top. The unit of the Galaxy A5 here is one using the 1.6GHz Exynos 7580 octa-core processor.

The first part of the video shows a bootup speed test. Both phones are simultaneously powered up to see which one is ready for action first. The Samsung phone is a clear winner here. In fact the difference between them is quite noticeable. The reviewer then shows some of the UI differences of the two handsets and then moves on to a Geekbench benchmark test. You’ll see the single-core and multi-core scores for each, and there’s a noticeable difference in the single-core results while the multi-core scores are much closer.

Following this the Ookla Speedtest is conducted. Both handsets are on the same server and you’ll see upload and download speeds displayed. You can check them out when you view the video below, and this time the results are exceedingly close. The reviewer also offers some interesting insight, for example the preference of display, although we won’t give everything away before you watch the video.

Once you’ve taken a look we’d like to hear your thoughts. Are you surprised by the winner of this Samsung Galaxy A5 (2016) vs Sony Xperia Z5 Compact speed testing?