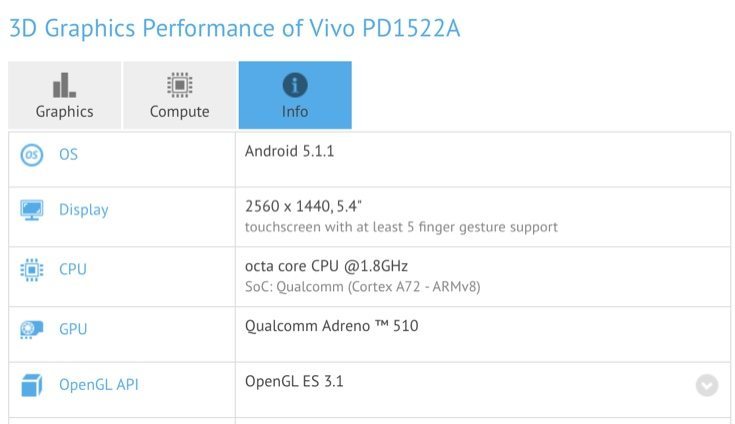 Vivo has already confirmed that its Xplay 5 will be officially launched at a March 1st event, and now it appears another new Vivo smartphone could appear alongside it. A Vivo PD1522A benchmark spot has revealed an upcoming device that could be an Xplay 5 variant. We often see our first signs of upcoming smartphones in benchmark appearances so this is an interesting sighting.

A new Vivo phone with model number PD1522A has surfaced on GFXBench, and this provides us with several specs for the device. The smartphone in question packs a 1.8GHz Snapdragon 620 octa-core processor, Adreno 510 graphics, a 5.4-inch display with Quad HD resolution (2560 x 1440), and 4GB of RAM.

Further specs revealed in the filing are a 16-megapixel rear camera with autofocus and LED flash, and an 8-megapixel front-facing shooter. The Vivo PD1522A was running the Android 5.1.1 Lollipop OS for its benchmark appearance. There have been some reports suggesting that the Vivo PD1522A might in fact be the Vivo Xplay 5. However, we know that’s not the case as Vivo has already confirmed a Snapdragon 820 chipset, a massive 6GB of RAM, and Hi-Fi 3.0 audio for the Xplay 5 in official teasers.

It could be that the Vivo PD1522A is a lower specced cheaper variant of the Xplay 5 although the specifications in benchmarking still indicate a nicely high-end device. We do know that Chinese manufacturers often produce several variants of smartphones to offer different price points, so the idea that this could be another version of the Xplay 5 is certainly plausible.

Alternatively it could be that the Vivo PD1522A is entirely unrelated to the Xplay 5. Either way we may find out from the event on Tuesday so hope to bring more news then. Are you waiting for the Vivo Xplay 5? Do you think the Vivo PD1522A could be a variant of the phone?