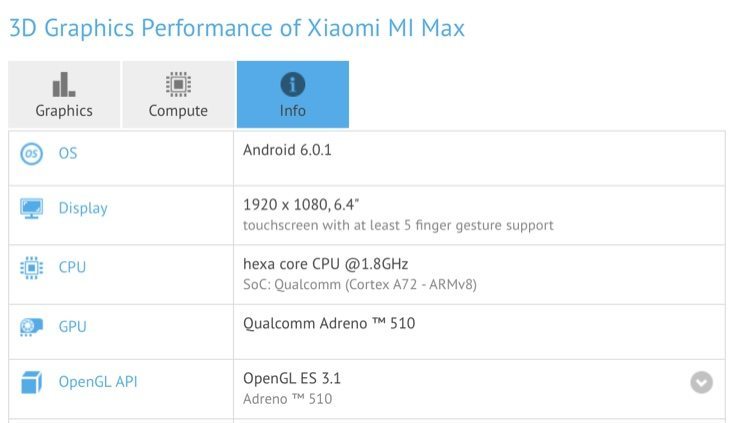 We’ve known that a device called the Xiaomi Mi Max (aka Xiaomi Max) was on the way for a few weeks now, and there have already been some leaks and teasers. The company has announced that the massive phablet will be unveiled at a May 10th event in China, and now some Xiaomi Mi Max specs have been uncovered before the launch.

Earlier this month we reported on a leaked 6.4-inch display panel for the Xiaomi Max, and that was followed by a render that gave us a better idea of how it would look. Little has been known so far about specifications for the device, but that has now been made clearer following the phone’s appearance in a GFXBench benchmark filing.

The database entry shows Xiaomi Mi Max specs that include a 1.8GHz Snapdragon 650 hexa-core processor, Adreno 510 graphics, and a 6.4-inch display with Full HD resolution of 1920 x 1080. It has 2GB of RAM and 16GB of internal storage, and further specs listed are a 16-megapixel rear camera with LED flash, and a 5-megapixel front-facing shooter.

Connectivity options include WiFi, GPS, and USB, and the handset that appeared in the benchmark test was a single SIM device. Of course it’s possible that there will also be a dual SIM version. As shown by the filing the Mi Max was running the Android 6.0.1 Marshmallow operating system. The battery size is not shown but is expected to be around 4000 mAh.

A TENAA appearance of the phone should also give us further information soon, hopefully including the battery size of the device and some official images. As Xiaomi is already posting teasers for the Mi Max we may learn some further tantalizers before the official launch on May 10. We’ll bring more news as we hear it, and in the meantime we’d like to hear your initial impressions of the Xiaomi Mi Max?