At last, after months of build-up and speculation the iPhone 5 has now been officially announced at an Apple event in San Francisco. It looks as though Apple has another big hit on its hands and first impressions from those in the know seem to be very favorable. Earlier today we wondered if the appearance of the iPhone 5 would affect demand of the recently announced Samsung Galaxy Note 2. Now the iPhone 5 has been revealed we thought we’d take a further look at the iPhone 5 or Galaxy Note 2 as it’s decision time.

Earlier it was difficult to know whether the iPhone 5 would affect sales of the Galaxy Note 2 as no specs and features for the new iPhone had yet been confirmed. We did however give all the details for the Galaxy Note 2 to give you an idea what to expect when it is released in Q4 and this is already proving to be hugely popular with many Android fans already making the decision that it will be their next choice of smartphone. Check out our previous article here for Galaxy Note 2 specs.

Now we finally have official details of specs and features for the iPhone 5 we’ll just run through some of the highlights. Firstly there’s a step up to a new A6 processor, twice as fast as the A5 in the iPhone 4S. There’s also a larger 4-inch elongated display with resolution of 1136 x 640 and although this is larger than the 3.5-inch display of the iPhone 4S it’s nowhere near the size of the 5.5-inch display on the Galaxy Note 2. This of course may be a big deciding factor for some who prefer the larger phablet style while others favor a smaller handset.

The iPhone 5 comes in 16,32 or 64GB storage models and will be available in black with slate or white with silver color options. The rear camera is still 8-megapixels although there are new camera features and the front-facing shooter steps up to 1.2-megapixels. The new iPhone also has a smaller dock connector, new nanoSIM and at long last, 4G LTE connectivity so it has a lot going for it and one of the first hands-on experiences with the phone gave it some glowing praise. Another bonus is that it will launch running the new operating system, iOS 6. 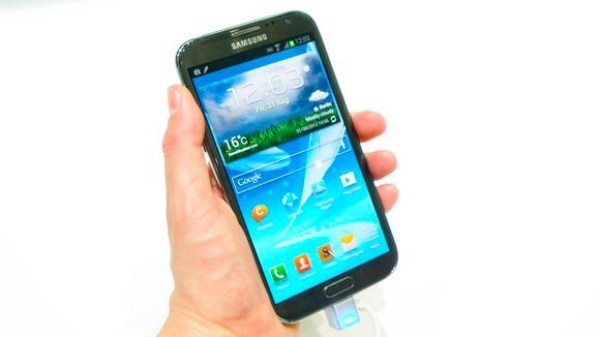 We already know the Galaxy Note 2 is coming to Europe, Asia and the Middle East at some point in October with a launch in North America later on. However another deciding factor may now be that the iPhone 5 is set to release on September 21 in many regions including the US and UK with prices starting from $199. If you’re an Android or iOS enthusiast that may already be enough to have made your choice but now we finally have official details for the iPhone 5 we’re really interested to know your decision between the two handsets if you were open to either.

Maybe the display size is the main factor for you and so your choice will be the Galaxy Note 2? Alternatively it may just be the fact that the iPhone 5 will beat the Note 2 to the shelves that makes you opt for the new iPhone. Let us know with your comments.