The iPhone 5 from Apple finally hit store shelves on Friday and as we expected it’s selling in phenomenal numbers. Most of the improvements that we expected for the iPhone 5 were actually fulfilled and although the rear camera remained at 8-megapixels Apple was quick to claim the new iPhone took better low-light images, had a new panorama mode and much more. Today we have an interesting look at the iPhone 5 camera in panorama and low-light conditions, as detailed by a professional photographer, that illustrates the changes since the iPhone 4S camera.

We previously gave details on the iPhone 5 camera changes and also looked at the iPhone 5 vs the Galaxy S3 in a camera shootout. The photos we have details of today though are particularly intriguing as the images are taken by a travel photographer, Austin Mann, rather than the normal images we see appearing on tech sites. Mann took to work with the new iPhone 5 shortly after release whilst on a trip to Iceland with the intention of testing out the low-light capability and also the panorama mode, as reported on his travel blog here.

After two days of using the new iPhone’s camera the upgrade was described as “pretty incredible” and the panorama mode described as working “insanely well.” The iPhone panorama feature was said to be simple to use and coped well with the close proximity environment of an airplane, even though there was some slight morphing of faces. We can also see images of a landscape in panorama form taken in a 15-second sweep and the resulting 28-megapixel photo is extremely sharp and clear. Advantages of the iPhone 5 camera are a live preview of the panorama image as you’re taking it and an on-screen arrow enabling the user to more easily stay level.

Moving on to low-light capability this was described as very impressive and a real step up from the iPhone 4s. There are also improvements with noise-levels and a much faster lens offering much better focus in darker conditions. Some pictures of the same scenes are shown taken with the iPhone 4S and then iPhone 5 to show how much better the iPhone 5 camera is. We’ve shown a couple of Austin Mann’s images here but check out his blog for many more. The panorama mode also worked well in low-light conditions but one drawback was that the images were grainier.

The photographer also noted that the shooting speed of the iPhone 5 camera was also “significantly” improved with fast shutter fire that was severely lacking with the iPhone 4S. Although this was not a formal durability test a consequence of the trip was that Mann’s iPhone 5 became covered in water from a waterfall and that a companion’s iPhone 5 was dropped into mud. Both models continued to work fine. This was echoed in our recent look at a drop test, although only yesterday we told about build problems being reported by some iPhone 5 owners. 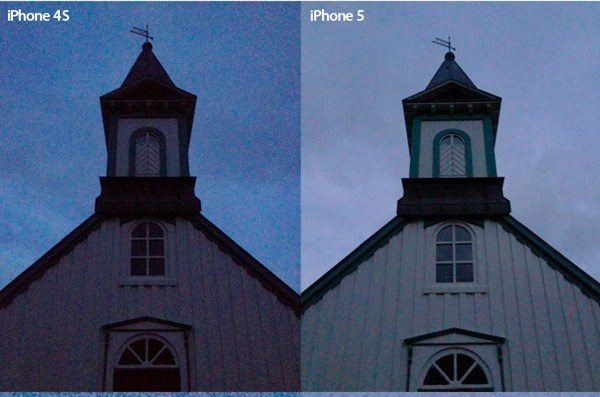 One more thing of interest is the world phone capabilities of the iPhone 5, a real plus for those people who move around a lot and making life a lot easier. All in all it’s fair to say that Mann was suitably impressed with the enhancements and additions to the camera on the iPhone 5 so if you use your smartphone a lot for photography then the upgrade to the iPhone 5 from the 4S may well be worth it.

We’d like to hear from our readers about this. Have you already got the iPhone 5 and have tried out the camera? Can you see a significant improvement? What is your favorite addition to the iPhone 5’s camera capabilities? Let us know with your comments.