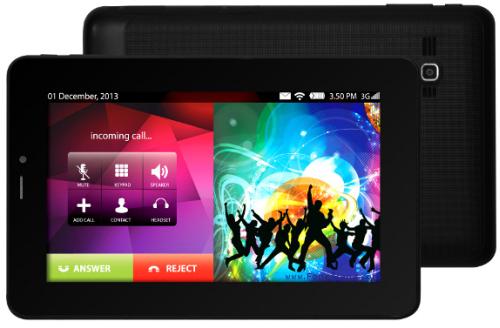 We have been seeing in the last couple of year’s smartphones increasing in size to offer a mobile experience closer to a tablet PC, but we are now seeing slates that can also be used to make calls, and now Lava has released the E-Tab Connect Android tablet that has a calling feature.

Recently the Samsung Galaxy Note 8.0 was announced that also had a calling feature and now in India Lava Mobiles has released a 7-inch Android tablet PC that supports 3G voice calling. The device is priced at Rs. 9,499 and has a WVGA (800 Ã— 480) pixel resolution display running the Android 4.0 Ice Cream Sandwich operating system.

The device uses a Qualcomm Snapdragon MSM7227A ARM Cortex A5 processor clocked at 1GHz that is coupled with 512MB of RAM and 4GB of on board storage. The device comes with two cameras with a 2MP unit on the back and a 0.3MP VGA shooter on the front for video calls.

There is a SIM card port for the 3G connectivity and voice calling support and the device is only 10mm thick and weighs 350 grams, and while most users won’t be purchasing a tablet to make calls it is a nice feature to have.

The company is getting pretty busy recently after it launched the XOLO Q800 and is getting ready to show the world a handset that is being called the fastest available this coming Thursday.

Do you like the idea of being able to make calls on a tablet PC?