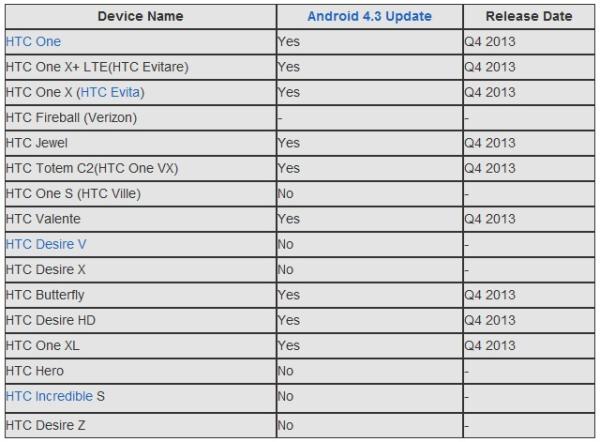 There was a time when it was thought that Google would launch Android 5.0 Key Lime Pie at the recent I/O event, but instead no new version of Android was announced. We have instead been hearing various rumours about another version of Jelly Bean, and now a questionable HTC device list for the Android 4.3 Jelly Bean update has appeared with release timeframes.

We have been hearing about the Android 4.3 version of Jelly Bean for a while now with videos exploring the new features of the software, and new Bluetooth technology that is less power hungry. Now a list has appeared that features a number of HTC handsets that will supposedly be getting the new firmware and when.

You have to wonder about the authenticity of the list though as it has the HTC Desire HD down to receive the new software during the fourth quarter of this year, and this is for a handset that has been left stuck on Android 2.3 Gingerbread unless you have flashed a custom ROM.

Other handsets down to receive the Android 4.3 Jelly Bean update include unsurprisingly the HTC One, One X, and One X+ all during the fourth quarter of this year. The likes of the Desire X, Desire S, Desire Z, Desire V, Incredible, and HTC Hero are all set to miss out on the new firmware if this list is accurate.

These lists even if they are from the manufacturer themselves can easily change and if accurate means that owners of recent hardware may have quite a while to wait before seeing the new firmware on their handsets.

One thought on “Questionable HTC device schedule for Android 4.3 update”