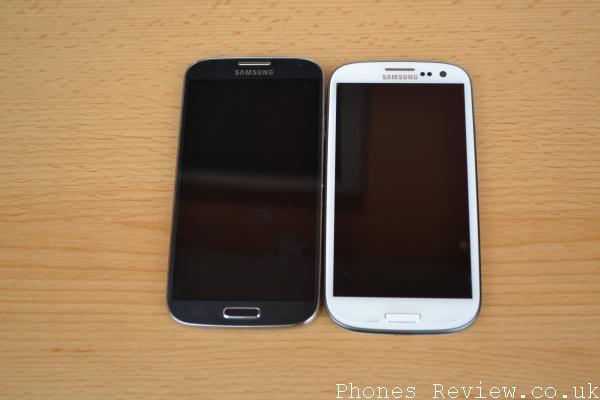 Back in March Samsung revealed to the world the Galaxy S4 with the handset quickly being released in a number of regions as the company looks to build on the success it saw with last year’s model. There have been a lot of comparisons made with the device and we are now revisiting the Samsung Galaxy S4 vs. Galaxy S3 in some visual reviews.

We compared the specifications of the two devices shortly after the Galaxy S4 was announced, and earlier this month we also compared both the mini versions of the two handsets, but today we want to look at the full sized versions to see what has changed since the Galaxy S 3 was released last year.

As it can be seen in the first video is that both handsets look pretty similar from a distance while the S3 has a slightly more curved form factor. Obviously the biggest change is the Full HD display of the new model that has also been increased up from 4.8-inch to 5-inches, and the S4 is 3grams lighter despite this increase in screen size.

Pixel density is a major difference with the S3 having 306ppi compared to the 441ppi of the Galaxy S4, which obviously is noticeable in use. Another improvement on the S4 screen is the ability to use the display while wearing cloves, which for many smartphone users can be a problem in winter.

In use both handsets booted up in around the same time but the S4 was slightly quicker when browsing the Internet and loading demanding pages, and there are also some side by side comparisons in the camera quality.

The next video also goes through the differences between the two devices including all the cosmetic changes and how both handsets feel in the palm of your hand. It was decided that if you don’t need the fastest available handset on the market the S3 is still good enough, but the S4 comes in to its own when using high demand apps and games.

As we found in our recent review of the Galaxy S4 the device is undoubtedly better than the older model, but that’s not to say everyone that owns the Galaxy S3 should rush out to upgrade to the newer model, with many of the improvements focusing on new software features with many of them eventually being ported over to the old handset anyway.

The final video we have for you is focusing on the popular Premium Suite of features and Multi-Window, which allows users to run two applications at the same time on the display. On the Galaxy S4 the feature works slightly differently and is obviously helped by the slightly larger display.

Watch the three videos and tell us what you think or if you have upgraded to the Galaxy S4 after owning the S3.