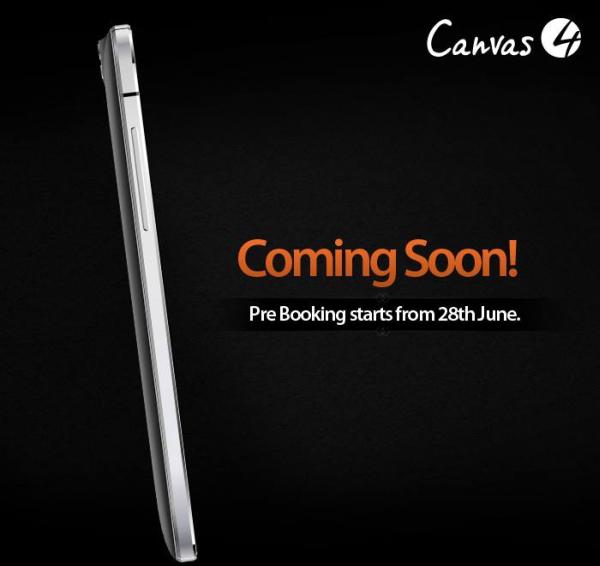 Consumers in India seem to get treated to new mobile devices on an almost daily basis recently, and there are a number of manufacturers that have been responsible for some great high end smartphones of late with the Micromax Canvas 4 now given a pre-order date.

We have been hearing a lot about this upcoming device recently as the company has been busy on a marketing campaign teasing the impending smartphone, and now it has taken to Facebook to reveal that pre-orders will start from tomorrow, June 28th.

There is unfortunately no information of a release date for the Micromax Canvas 4 but the device is expected to have some high end specifications that will even give the Galaxy S4 a run for its money. Rumours have suggested the price will be around the Rs. 15,990 mark and for your money you should get a smartphone with a 5.5-inch Full HD touchscreen display.

This will supposedly be powered by a quad core Cortex A7 processor running at 2GHz along with 2GB of RAM with a PowerVR Series 5XT GPU taking care of the graphics. There is thought to be either 8GB or 16GB of internal storage that will be expandable by a further 32GB via microSD card, and camera wise there will be a 13-megapixel main unit paired with a 3.2-megapixel front facer.

The company has grown into a major force in the smartphone market now offering consumers in India some great looking hardware and the Canvas 4 looks set to continue this trend.

Are you going to pre-order the Micromax Canvas 4 tomorrow?