Interest is really ramping up now for the expected release of the iPhone 5S and also the much rumored budget iPhone. All the signs are pointing to a September launch for the next iPhone, and recently it’s begun to look increasingly likely that Apple is indeed to bring out a more affordable low-cost iPhone. Some new leaked images have now appeared of the iPhone 5S and a budget iPhone, reinforcing the likelihood of two new arrivals soon.

Not too long ago we told of reports that a budget iPhone would be shipped in August ready for a release in September. For some time now we’ve also expected a release around the same time for the iPhone 5S. It’s extremely likely that the next iPhone will release running iOS 7, which is due for a public release in fall, and so everything is beginning to tie in nicely.

We always seem to see more leaked images appear as we get closer to the launch of a new device, and we’ve already seen leaked component images and also concept versions of the iPhone 5S and budget iPhone. The images we are sharing with you today are purported to be the iPhone 5S chassis and the casing of the budget iPhone.

The image directly below is claimed to be of the budget iPhone casing, and as you can see there are various color options including blue, green, red, white, and yellow. The leak from a Taiwanese publication also says that the device is made from plastic, as we expected, and also backs up previous rumors that the bezel on the low-cost iPhone will be in white rather than black. 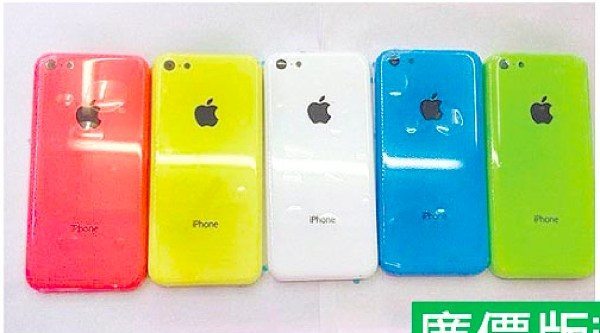 Pricing of the budget iPhone is also given as $349 for the 16GB model, $449 for 32GB, or $549 for a 64GB variant, and specs are rumored to be similar to those of the current iPhone 5. Although much of this ties in with previous speculation, we must stress that so far all of the above details are unconfirmed including the pricing.

Moving on to the iPhone 5S, and the image below this story shows what is claimed to be the aluminum chassis of the handset. Specs that have been leaked and rumored so far include a 4-inch IGZO display with resolution of 1136 x 640 and 326 ppi, 2GB of RAM, and a 12-megapixel rear camera. We had expected an improved processor but it seems the CPU could be the same as the one used on the current iPhone, although graphics could be upgraded.

Other recent rumors for the iPhone 5S include 4G LTE-A and also a fingerprint sensor. As with the budget iPhone we’ll remind you that none of the above information is official yet, as Apple is employing its usual secrecy for upcoming devices. Of course we have no way of verifying these latest leaked images either, but they do fit with what we’ve seen and heard so far.

You can be sure that we’ll continue to follow developments regarding the iPhone 5S and budget iPhone and pass on the latest news. We always enjoy hearing from readers so let us know your thoughts on the next iPhones. Are you waiting for the iPhone 5S or the budget iPhone version?