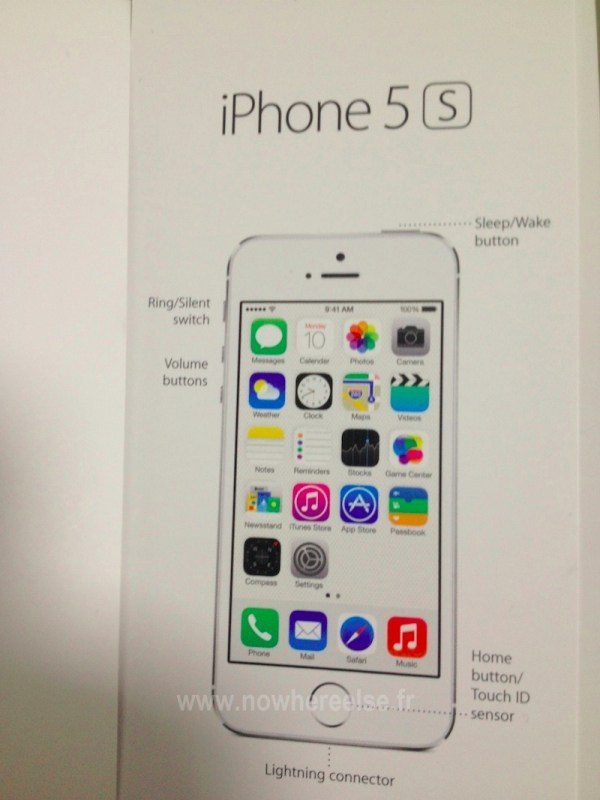 The tech world is almost at fever pitch today as the new iPhone is about to be unveiled, one of the most notable days on the mobile calendar. In fact this year we are expecting two iPhones to be announced, the iPhone 5S and budget variety iPhone 5C. Ahead of the big Apple event we have iPhone 5S last-minute specs reinforcement, with further leaked news.

As usual Apple has kept the specs for the soon to be announced iPhone 5S a closely guarded secret, but widely rumored specs for some time have been rumored to be an upgraded processor, improved camera with dual-LED flash, a possible 128GB version, and so-called killer feature of a fingerprint sensor.

The fingerprint reader beneath the home button looked almost a dead cert anyway, but now a leaked iPhone 5S user guide has come to light that reinforces the possibility even further. An image from the iPhone 5S user guide (see below) refers to the Home button/Touch ID sensor, and the image also shows the device running iOS 7.

Obviously we cannot verify this leaked image of the user guide. However it was shown on NowhereElse (Google Translated), who have previously been a pretty reliable source of upcoming Apple device information.

In further news GSM Arena has given more leaked specs for the iPhone 5S from a Chinese website. As we expected, the processor has stepped up to an A7 chip, although it’s still not clear if this will be a quad-core processor or what the clock speed will be.

However, the rear camera still appears to of the 8-megapixel variety, which might disappoint some potential buyers. It does have a wider F/2.0 aperture rather than F/2.4 though, which will help in low-light conditions, as well as the dual-LED flash we expected.

The front-facing camera and video recording look to be the same although there’s a rather intriguing reference to the framerate stepping up to 120fps from 60fps. Odd considering the current iPhone doesn’t have video capture of 60fps.

Again the fingerprint scanner is detailed, and although the battery capacity is the same as on the current iPhone 5 the battery life has been enhanced to around 250 hours on standby, probably achieved because of the new A7 chip. The overall dimensions and display size of the iPhone 5S are also said to be the same as the existing iPhone 5.

Although we cannot treat this leak as confirmation, it does tie in rather nicely with what we think we know already. However, later today we should have all of the specs of the iPhone 5S confirmed by Apple (event world times here, or live blogs here).