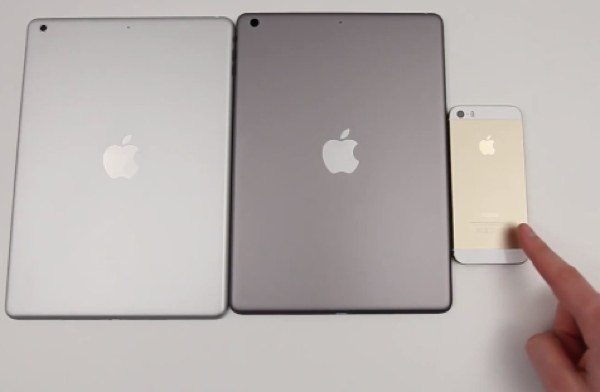 There’s a lot of anticipation ahead of an expected Apple event later this month where we expect new iPads to be unveiled. The iPad 5 has been the subject of numerous leaks, and a new video has now appeared that is claimed to be of the iPad 5 casing in Space Gray. This latest look shows that the tablet appears to have black front bezels.

We’ve almost lost count now of the amount of leaked parts we’ve seen that purport to be from either the iPad 5 or iPad mini 2. Just two examples are a previous video that was said to be of the aluminum rear shell and front panel of the iPad 5, and images that were claimed to be of an iPad 5 casing in a new Space Gray color option.

The new YouTube video also purports to be of the iPad 5 casing and comes from the same source as the earlier video linked to above. It appears to show the upcoming iPad 5 rear casing in the new Space Gray color option, and although it’s very similar to the casing on the silver model shown in the previous video, there are a few changes.

The Space Gray iPad casing shown here has a black front bezel, whereas the previous Silver version that we saw had a white frontage. As well as this there’s a similarly colored ring insert on the reverse of the tablet surrounding the camera.

It’s thought that this new Space Gray color option will replace the Slate model, so it looks as though the iPad 5 could have similar color styling to the recently released iPhone 5S. This again raises the possibility of a Gold iPad 5, which has also been rumored over recent weeks.

The iPad 5 part shown on this video could be an early production or prototype version though, as it doesn’t appear to feature the magnets that connect to the Smart Cover accessory. Alternatively, maybe Apple is cooking up a new idea entirely?

We’ll give our usual caution that we cannot verify it this is the real deal, but the video is being widely circulated and certainly looks plausible. Recently we also saw some design drawings from a case manufacturer that compared the size of the iPad 4 to that of the iPad 5.

It shouldn’t be too much longer until all is officially revealed, as there are murmurings of an October 15 event, although Apple has yet to confirm this. We expect the iPad 5 to be announced at this event, but there have recently been reports that the release of the iPad mini 2 may not be until later. However, we could still see it debuted at the same event.

While we wait for more we’d be interested to hear your thoughts on this video. Do you like the look of the styling and color of this purported Space Gray iPad 5 casing? Maybe you like the possibility of a gold iPad 5 on the way? Let us know with your comments.