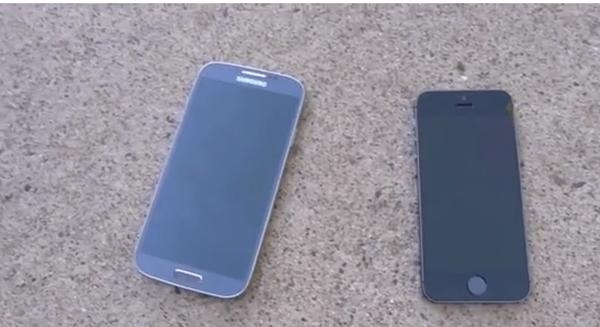 Flagship smartphones that are constantly being released are not cheap so if you have the misfortune of dropping the handset onto the floor it could cause some expensive damage, and today we have a video for you comparing the iPhone 5S vs. Galaxy S4 in some drop tests.

We have recently seen the iPhone 5S going up against the iPhone 5C in some similar tests, but today it is being compared to the Samsung Galaxy S4. Below this article we have embedded a video for your viewing pleasure that is carrying out a number of drop tests on the two handsets.

The video starts with the iPhone 5S with the device being dropped from a height of 5 feet so it lands on its side, and besides the horrible sounding metallic sound the device holds up well with no physical damage.

We then move onto the dreaded front face drop from the same height which results in the entire screen being shattered even though it still works, but you run the risk of cutting your fingers while using it.

Now we move on to the Samsung Galaxy S4 that is going to be put under the same tests, and on point of impact the rear cover comes away from the rest of the handset but didn’t result in any damage to the phone.

The device is then dropped from the same height so it lands straight onto the display, and the device comes out a little better than its rival does. You may be interested in our previous articles that saw the Galaxy Note 3 going through the drop test treatment or how the iPhone 5S and 5C compared to rival handsets in some durability testing.