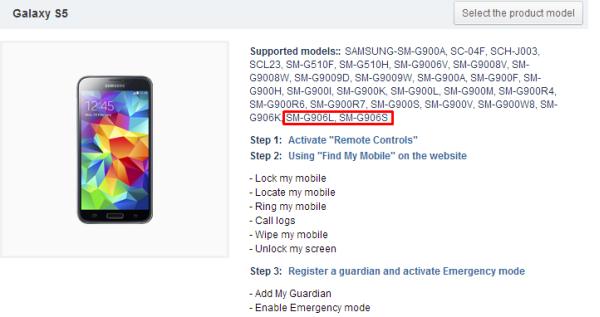 While we have know seen the launch of the Galaxy K Zoom earlier today it seems that the company has another flagship handset in the pipeline, as now the Galaxy S5 Prime existence is shown by Samsung via a website listing.

Despite earlier denials by the company that such a handset was in development we recently heard some launch rumours about the Samsung Galaxy S5 Prime, and now the device that has been rumoured to have the SM-G906 model number has been listed on a website by Samsung.

The Galaxy S5 Prime was listed on the company’s Find My Mobile Service which allows owners to keep an eye on their handsets remotely, and there are a number of different variants of the SM-G906 model listed.

This model number has emerged before though with some suggestions it could be for the Samsung Galaxy Note 4, so until one of these devices makes an official appearance at a press event we won’t know for sure what we will be seeing.

Do you like the idea of a Samsung Galaxy S5 prime?

One thought on “Galaxy S5 Prime existence shown by Samsung”