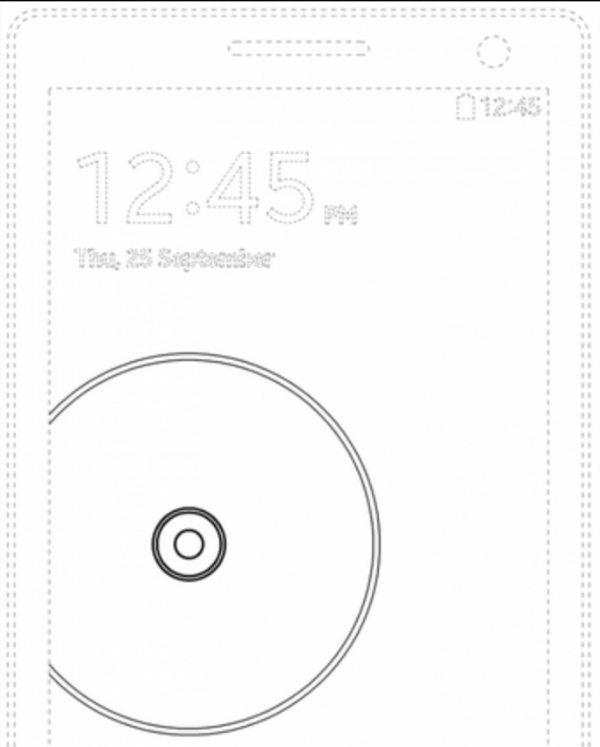 Just a few of the recent leaks that we’ve reported on regarding the Galaxy Note 4 concern some specs from benchmarks, and also some recent prospective camera specs. Now a German patent for Samsung has disclosed an interesting image and it’s thought this could show the lockscreen of the Note 4, and how users of the device could unlock the phone by swiping away from the center of the circle.

The source also gives specs for the Note 4, and these tie in with the leaked specs we’ve seen already, including an Exynos 5433 or Snapdragon 805 processor, a 5.7-inch display with resolution of 2560 x 1440, 3GB of RAM, and 32GB of internal storage. The rear camera is said to be either a 16-megapixel sensor without optical image stabilization, or a 12-megapixel unit with OIS, although in our article on camera specs linked to above the latter option was cited in recent news.

As for a release timeframe for the Note 4 there’s an interesting suggestion to be taken from the patent image. We recently informed readers about reports out of Korea saying that the Galaxy Note 4 would release directly after the phone’s introduction at IFA Berlin, which takes place between September 5th and 10th. If this is accurate we should see the phone arrive before the end of September, and the patent image shows a date of September 25th. It’s a long shot but perhaps this is the actual Galaxy Note 4 release date?

One thing for sure is that we’ll be keeping you informed with further developments about the Note 4 phablet so do check back with us for more. Are you hotly anticipating the release of the Samsung Galaxy Note 4? What do you think about the patent image that could show the lockscreen of the device? We’re always interested to hear your opinions so do drop us a line.