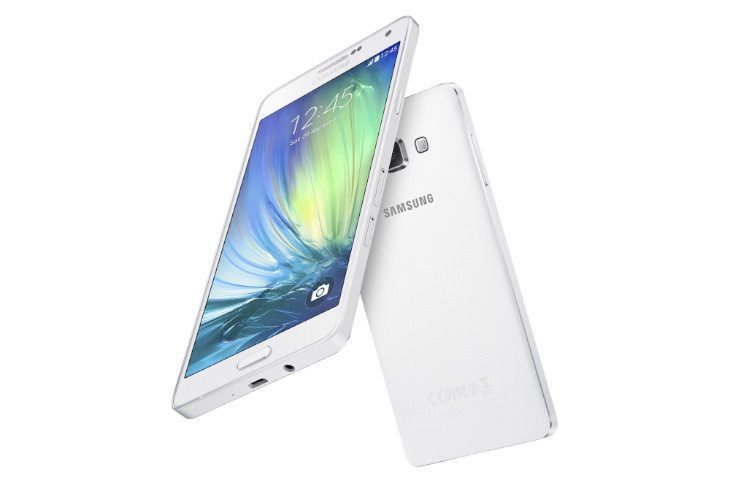 There have been numerous specs leaks and rumors about the Samsung Galaxy A7 for some months now, and this smartphone has finally been announced. The Samsung Galaxy A7 is now official with the release set for late Q1, and it will be competitively priced.

We knew that this phone would be officially unveiled soon, following an FCC spot and also a sighting of it in a magazine alongside the Samsung Galaxy Grand Max that has since released. The handset has a metal build so is likely to appeal to buyers, and there’s also optional dual SIM functionality.

There will be two chipset variants for the Galaxy A7, both of the octa-core variety. The dual SIM version will pack a Snapdragon 615 64-bit processor while the single SIM model will have an Exynos 5430 32-bit processor. It runs Android 4.4 KitKat (to be upgraded to Android Lollipop) skinned with Samsung’s TouchWiz UI.

Further specs for both are a 5.5-inch HD Super AMOLED display, 2GB of RAM, and 16GB of internal storage with microSD expansion. It has a 13-megapixel rear camera with LED flash and 1080p video capture, a 5-megapixel front-facing camera with enhanced selfie features, and a 2600 mAh battery. It has a full range of connectivity options including LTE, WiFi 802.11 a/b/g/n, Bluetooth 4.0, NFC, GPS, and microUSB 2.0.

Do you think the Samsung Galaxy A7 could be just the smartphone that you’re looking for? What are your thoughts on the pricing of this device? Let us know with your comments.