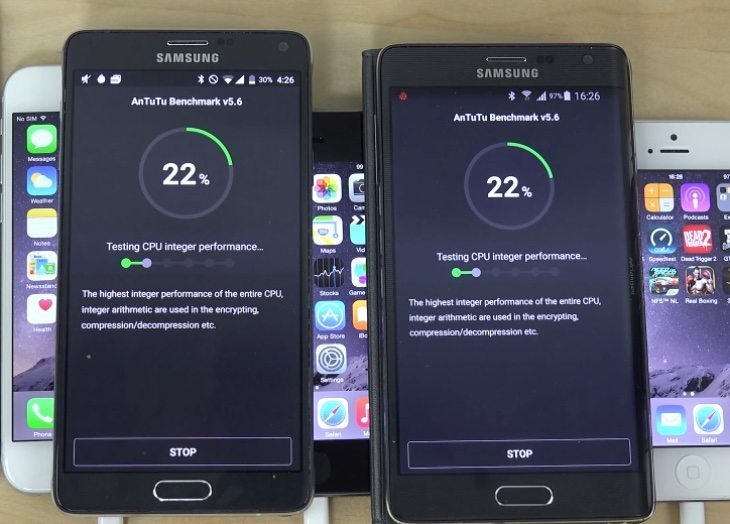 This should be an interesting comparison as many of the specs of these top-end Samsung phablets are similar. Below this article we’ve placed a YouTube video for your viewing convenience, and it shows an AnTuTu benchmark test being conducted on both phones. At the beginning the reviewer makes a point of saying that the Galaxy Note 4 is running an unofficial CyanogenMod 12 build based on Lollipop while the Galaxy Note Edge is running an official TouchWiz version of Android 5.0 that leaked.

Therefore this is informal testing but nevertheless an interesting diversion while we are waiting for the official rollouts of Android Lollipop to begin for these devices. Interestingly the Galaxy S5 Android Lollipop update is already rolling out and is now reaching more regions, arriving for the Sprint version from today for instance. As well as this the older Galaxy Note 3 has already begun receiving Lollipop in some regions.

The AnTuTu test takes a while to go through its paces on the Galaxy Note 4 and Note Edge and we should warn you that there’s rather an odd moment when the reviewer utters a few expletives. Once the test has been completed we then hear the scores. We’re not going to ruin your enjoyment of the video by giving the results here, but we will say that one of them enjoys quite a noticeable speed boost over the other.

There’s still no firm date for when the official release of Android Lollipop will start rolling out for these handsets, but you can be sure we’ll let you know when we hear the news. In the meantime after you’ve watched this video we’d welcome your comments on this benchmark comparison test between the Samsung Galaxy Note 4 and Galaxy Note Edge.