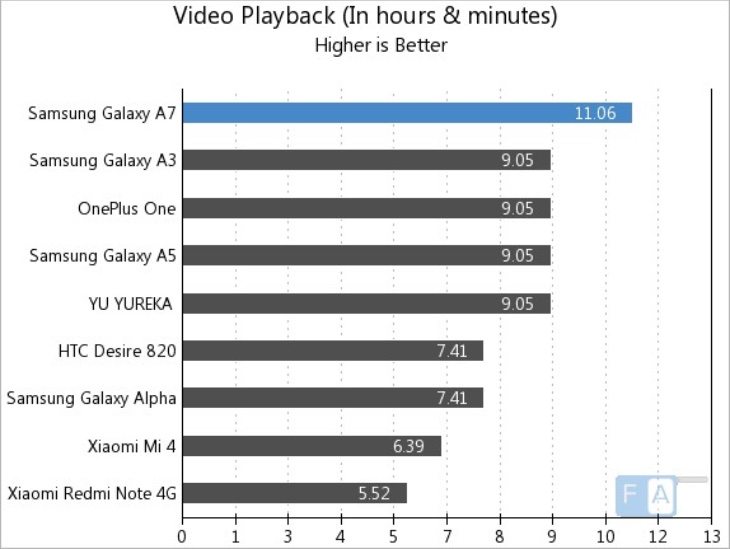 The Samsung Galaxy A7 has attracted a fair amount of attention since its recent release, and many people will be considering purchasing it at the moment. Battery life performance is an increasingly important aspect for many smartphone users, so today we have news of Samsung Galaxy A7 battery life testing and results compared with other handsets in this respect.

We’ve recently showed the Galaxy A7 in several videos comparing it with some other Samsung Galaxy phones as far as benchmarks, bootup speeds, and Internet speeds are concerned, so do check those out at the links if you choose. Juice is supplied with a 2600 mAh battery but this is non-removable, so it should be interesting to see how the phone copes in various testing.

The Galaxy A7 has been put through its paces by Fone Arena for Talk Time, 3G Browsing, WiFi Browsing, and Video Playback time. The results are then shown on charts compared with several other smartphones, just a few of which are the OnePlus One, Xiaomi Mi4, HTC Desire 820, Micromax Yu Yureka, and Samsung Galaxy Alpha.

For Talk Time the A7 managed 20 hours exactly (the same as for the OnePlus One) putting it pretty high up the table, as shown in the image below. Only the HTC Desire 820 and Xiaomi Redmi Note 4G beat it, on 25 hours and 2 minutes and 20 hours and 1 minute respectively. Interestingly the Galaxy A5 performed pretty poorly here, managing a time of just 11 hours and 7 minutes. 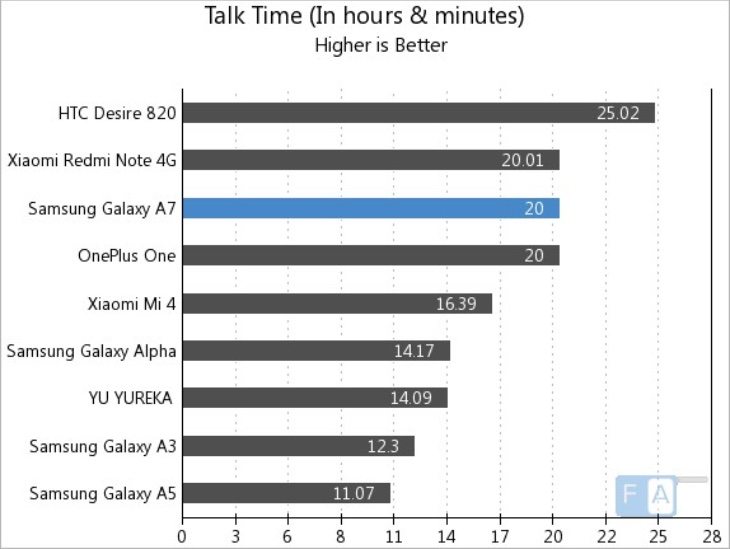 Checking out 3G Browsing the Galaxy A7 attained a time of 5 hours. The Xiaomi Mi 4 grabbed top spot this time at 6 hours and 15 minutes, with the OnePlus One and Redmi Note 4G also in higher positions. Meanwhile the Desire 820 was bottom with just 2 hours and 47 minutes.

The last testing concerned was Video Playback, and this time the Galaxy A7 achieved top spot with an impressive time of 11 hours and 6 minutes as shown in the image below. The Samsung Galaxy A3, OnePlus One, Galaxy A5 and Yu Yureka all managed 9 hours and 5 minutes by comparison.

You can see the other tables in full as well as Fone Arena’s overall Charge Rating and One Charge Rating for the Galaxy A7 at the source below. Have you been thinking of buying the Samsung Galaxy A7? Are you persuaded that its battery performance will meet your requirements following this testing?