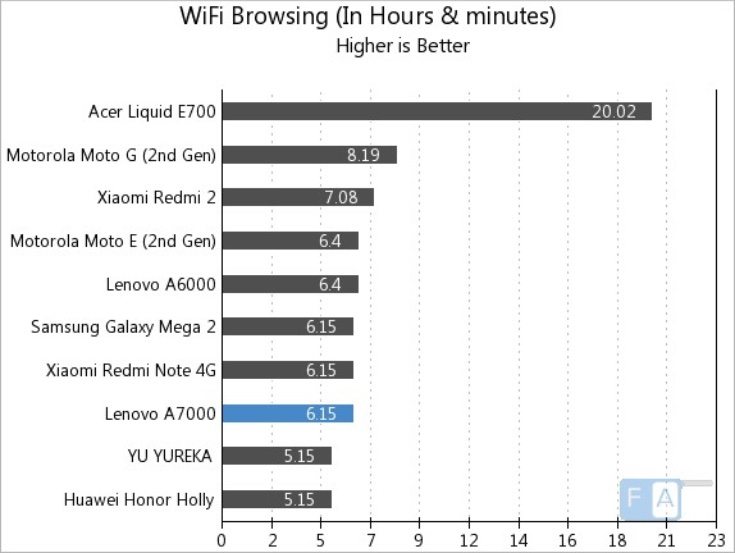 Lenovo has been producing some very decent smartphones recently with reasonable prices. The Lenovo A7000 is proving to be a popular buy as it offers real value for money and follows the popularity of the A6000, so if you haven’t already snapped one up you may be considering purchasing it. If battery life is important to you on a device then you might like to check out some information from Lenovo A7000 battery performance testing.

We’ve reported on the A7000 numerous times including recent specs comparisons with the Lenovo A6000 Plus and the upcoming Lenovo K3 Note, and also a gaming review. For some people battery life is a significant factor though, and the A7000 has a removable 2900 mAh battery. The phone has been put through its paces considering various aspects of battery performance and then the results were compared with other popular handsets.

The areas tested are Talk Time, 3G Browsing, WiFi Browsing, and Video Playback. Just a few of the other smartphones that the battery life of the A7000 is compared with are the Samsung Galaxy Mega 2, Xiaomi Redmi Note 4G, Xiaomi Redmi 2, Yu Yureka, and Moto G 2nd gen, and there are several more shown on the tables.

For the first test involving Talk Time the Lenovo A7000 grabbed equal top spot with the Moto E 2nd gen and Acer Liquid E700, all with an impressive time of 33 hours and 19 minutes (see first image below). The Lenovo A6000 with a lesser capacity 2300 mAh battery was in fourth place with 25 hours and 2 minutes, while languishing in bottom spot was the Huawei Honor Holly. 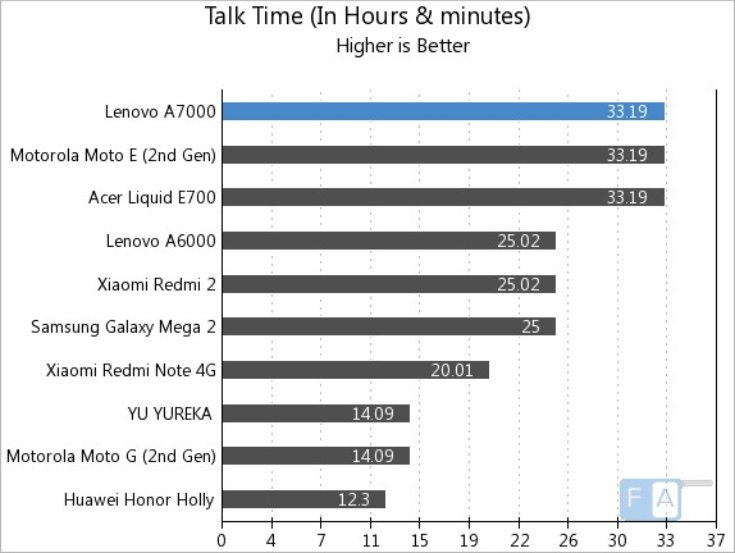 For 3G Browsing the A7000 was further down the table this time with a time of 5 hours. The Acer Liquid E700 was top of the heap with 6 hours and 40 minutes, while the Redmi Note 4G, Moto E 2nd gen, and Redmi 2 were all equal second with 5 hours and 33 minutes. On this occasion the Moto G 2nd gen was bottom of the chart with a time of just 3 hours and 34 minutes.

Moving on to WiFi Browsing, again the A7000 didn’t fare so well with its resulting time of 6 hours and 15 minutes putting it near the bottom of the table (image below). The Acer Liquid E700 stormed this test with a whopping time of 20 hours and 2 minutes. That’s a massive difference from the Moto G 2nd gen in second place with 8 hours and 19 minutes. The Honor Holly was in bottom spot again with a time of just 5 hours and 15 minutes.

Finally we get to Video Playback, and this time the Lenovo A7000 hit equal second position again with a time of 10 hours exactly, the same as the Redmi 2. Once more the handset at the top of the table was the…. you guessed it, the Acer Liquid E700 on 14 hours and 9 minutes. The Redmi Note 4G was in last place with a time of 5 hours and 52 minutes.

The overall finding of Fone Arena’s testing was that the A7000 managed better results than many other phones in the same price sector, although not as good as the Huawei Honor 4X. You can check out the One Charge Rating and other tables at the source below. Are you satisfied with the battery life performance of the Lenovo A7000 as found in this testing?