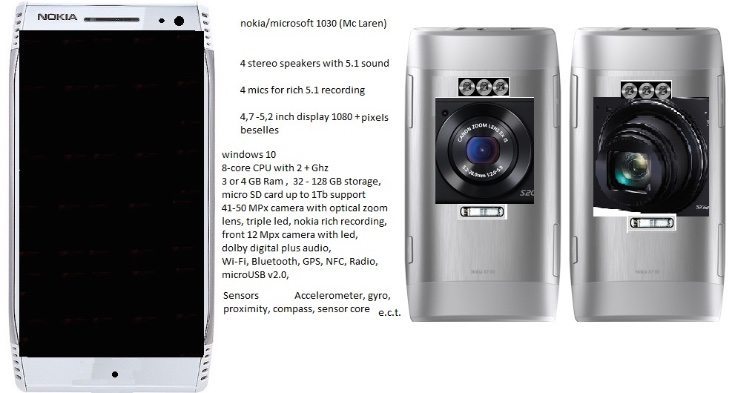 For almost as long as we can remember we’ve been hearing about an almost-mythical Lumia 1030 smartphone with the codename McLaren. For a while it looked like it was dead in the water but back in July a report suddenly suggested it was still in the pipeline. That’s still open to question but for now we can show you the latest Microsoft Lumia 1030 design that comes with a specs sheet.

There has been a huge amount of interest in the Lumia 1030 and we’ve already seen several earlier concept ideas for how it would look (examples here and here). Now the Microsoft Lumia 1030 has been imagined again, this time by designer Laura Donici. The handset seen here has some unusual styling and looks a little stocky. It seems to take its inspiration from the old Nokia X7 that released many moons ago and has a brushed metal accent on the reverse.

The specs list is maybe the more interesting bit of this design and includes a 2GHz or more octa-core processor, display in the realm of 4.7 to 5.2-inches with Full HD or higher resolution, 3 or 4GB of RAM, and between 32 and 128GB of internal storage that could be expanded to 1TB with microSD. It opts for a rear camera of between 41 and 50 megapixels with optical zoom and triple-LED flash, and a 12-megapixel front-facing camera with LED flash.

One thought on “Latest Microsoft Lumia 1030 design with specs sheet”