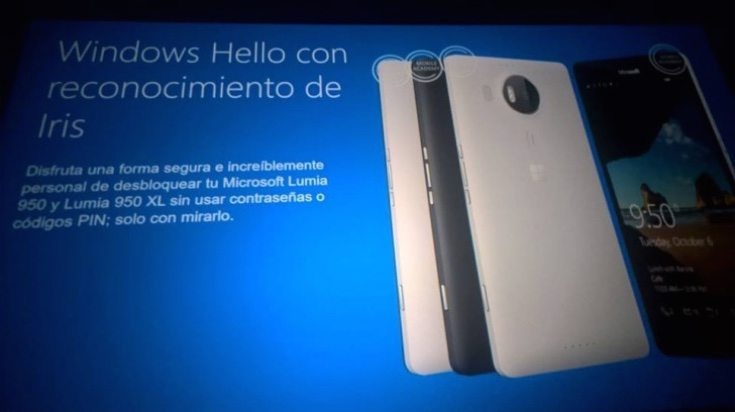 If you regularly read Phones Review you cannot fail to have noticed the numerous leaks so far on the upcoming Microsoft Lumia 950 and Lumia 950 XL flagship smartphones. Recently we also started hearing about the lower-end Lumia 550. Now, ahead of Microsoft’s event on October 6th, some leaked Lumia 950, 950 XL and 550 slides give some specs.

While this new leak backs up previously unconfirmed specs of these devices, it’s always good to see further evidence. While we cannot be 100% sure, the new leaked presentation slides certainly look authentic enough. We’ve included a few of the images here, and if genuine they confirm much of what we knew so far about these new Windows 10 Mobile devices.

Just as expected the Microsoft Lumia 950 XL is a phablet high-end device with specs that include a Snapdragon 810 processor, 5.7-inch display with Quad HD resolution, 3GB of RAM, and 32GB of internal storage (expandable). It has a 20-megapixel rear camera with optical image stabilization and triple-LED flash, 5-megapixel front-facing camera, and 3300 mAh battery. Features include an iris scanner, Qi wireless charging, and Qualcomm QuickCharge support. 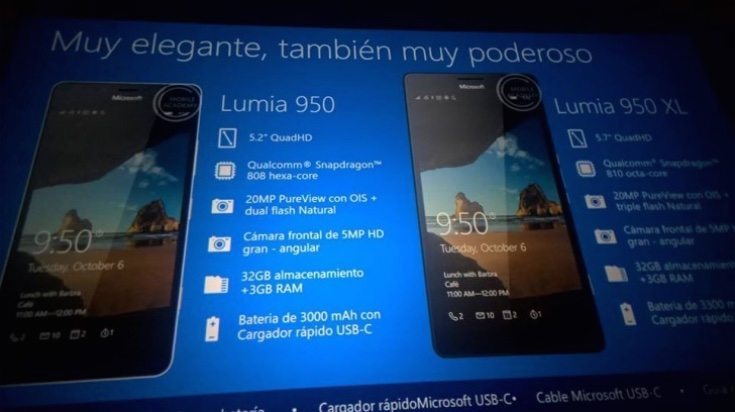 The majority of the specs for the Microsoft Lumia 950 are the same as for the 950XL. However, the smaller handset has a Snapdragon 808 processor, 5.2-inch display (also Quad HD), and a 3000 mAh battery. Also the rear camera has dual-LED flash. Both of these devices include support for Windows 10 Continuum, with a display dock to enable users to connect them to a full-size monitor. 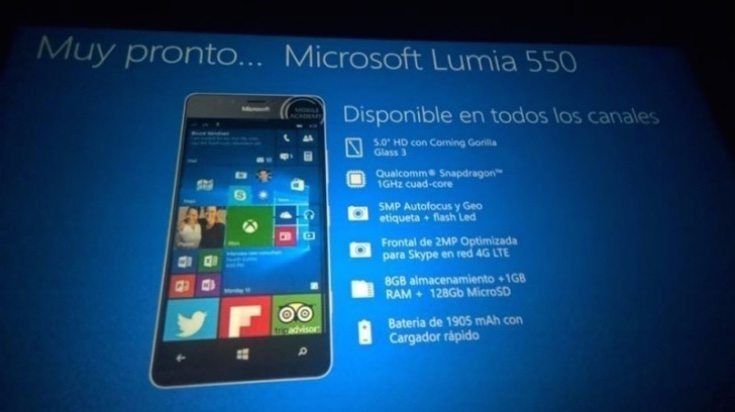 The more affordable Microsoft Lumia 550 will also be running Windows 10 Mobile and specs shown on the slides are revealed as a 1GHz Snapdragon quad-core processor, 5-inch display with HD resolution, 1GB of RAM, and 8GB of internal storage (expandable with microSD card). It has a 5-megapixel rear camera with LED flash, a 2-megapixel front-facing snapper, 4G LTE connectivity, and a 1905 mAh battery.

Anticipation is ramping up nicely for the release of these new Lumia smartphones, and there is likely to be plenty of demand for the high-end Lumia 950 and 950 XL as well as the lower-end Lumia 550. We’ll be here to give the full details of specs, release dates and hopefully pricing of all three from the October 6 event, so do check back with us for more. Which of these three new Lumia phones do you have your eye on?