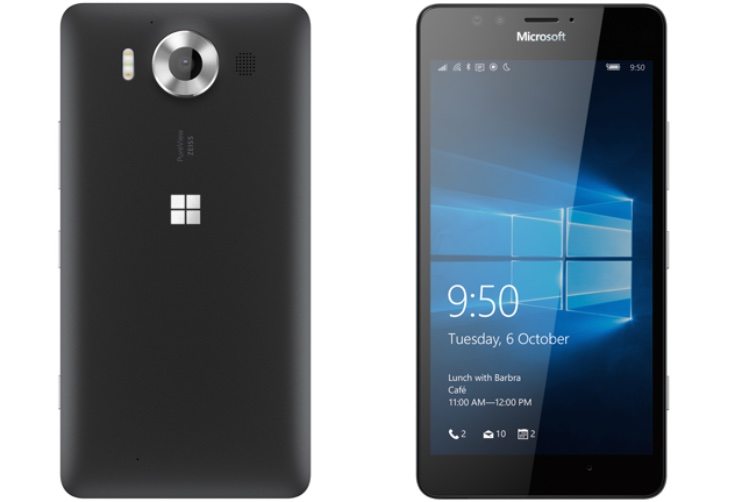 The first two smartphones that will release running Windows 10 Mobile were officially debuted yesterday by Microsoft. The flagship Lumia 950 and Lumia 950 XL were announced with US pricing, but there was no news on this for the UK. If you were waiting to hear, you’ll be pleased that we now have Microsoft Lumia 950 and XL version prices for the UK.

In our launch articles on the Lumia 950 and Lumia 950 XL we gave full specs and US prices of $550 and $649 respectively. Now Microsoft has detailed pricing for the UK. The smaller Microsoft Lumia 950 will have a SIM-free price of Â£499.99 while the Lumia 950 XL will be priced at Â£549.99. Both handsets will arrive in November although the UK release date has not been specified yet.

We’ll give you the key specs of the Microsoft Lumia 950 as a refresher. It has a Snapdragon 808 hexa-core processor and a 5.2-inch display with Quad HD resolution of 2560 x 1440. There’s 3GB of RAM, 32GB of internal storage (expandable), and a 3000 mAh battery. It has a 20-megapixel PureView rear camera and a 5-megapixel front-facing shooter, and further specs include 4G LTE connectivity and USB Type-C port.

For the Microsoft Lumia 950 XL there’s a Snapdragon 810 octa-core processor and 5.7-inch display, also with Quad HD resolution. It has 3GB of RAM, 32GB of internal storage (expandable), and a 3340 mAh battery. It has the same camera set-up with triple-LED flash and optical image stabilization as the Lumia 950, also with 4G LTE and USB Type-C. Both of these phones will come with Windows 10 for phones out of the box.

Microsoft has also given some details of existing Lumia handsets that will receive the Windows 10 Mobile update starting in December. Do you already have your sights set on one of these new Lumia flagships, and if so what are your thoughts on the confirmed prices? Are you going to buy the Microsoft Lumia 950 or the Lumia 950 XL?