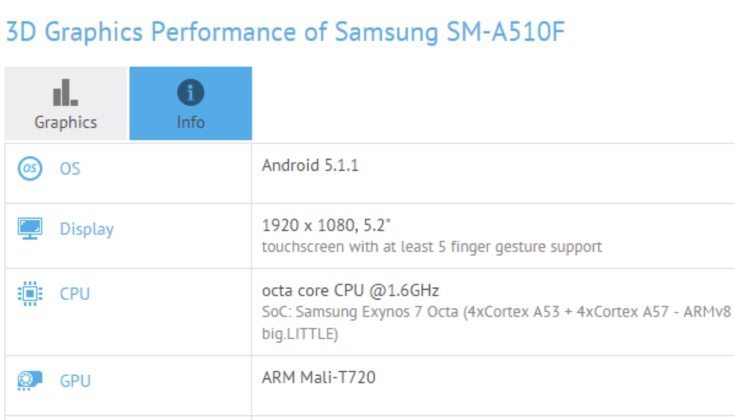 There have been growing leaks about the prospective upcoming second-generation Samsung Galaxy A3, A5 and A7. Previously we reported on a benchmark spot that revealed some specs for the next Galaxy A3 and A7, and now the new Samsung Galaxy A5 next-gen specs have also shown up in benchmarking.

Earlier in the month we reported that handsets thought to be the 2nd gen Samsung Galaxy A5 and A3 had appeared in an import listing for testing purposes. Then just two days ago the Galaxy A5 turned up again receiving Bluetooth certification. All of these signs along with the previous benchmark spot of the next A3 and A7 indicate that a launch is approaching.

Just as we expected, a Samsung Galaxy A5 2nd gen GFXBench listing has also surfaced. It’s for a Samsung handset with model number SM-A510F, tying in nicely with the earlier leaks. Specifications shown in this appearance include a 1.6GHz Exynos 7 octa-core processor, Mali-T720 graphics, and a 5.2-inch display with Full HD resolution of 1920 x 1080.

Further specs of the phone include 2GB of RAM, a 13-megapixel rear camera, and 5-megapixel front-facing snapper. Connectivity is covered with WiFi, Bluetooth, NFC, and GPS, and the handset in the benchmark test is running the Android 5.1.1 Lollipop operating system. The above specs sit nicely between those of the Samsung Galaxy A3 and A7 2nd gen models that have leaked.

We’ll point out that the model numbers in these spots are still not officially clarified as the next Galaxy A3, A5 and A7, although the previous benchmark we reported on actually included the names Galaxy A3 and Galaxy A7. Therefore we’re pretty sure that the next-gen Samsung Galaxy A5 along with the new A3 and A7 will release before too much longer.

Are you eagerly waiting for Samsung to officially announce these new smartphones? Is the Samsung Galaxy A5 the handset that most interests you out of the three, or is it the A3 or A7? Do let us know with your comments.

Via: WinFuture.de (Google translated) and GSMArena