Apple’s iOS 6, the latest update to its mobile operating system, was released on Wednesday and although most of the pre-release publicity about the new OS was very positive, on release there has been some harsh criticism about the upgrade. It has to be said that this iOS does seem to have been launched with more than its fair share of problems but it seems that all the criticism hasn’t deterred users from upgrading to it, in fact far from it.

Since iOS 6 became available we’ve been keeping readers informed with plenty of news about it and there have been some issues. After the initial downloading problems we told about concerns with the new Passbook app and then of the pretty fierce and widespread condemnation of Apple’s new Maps app. In fact many feel that the new iOS is a bit of a mess so you might imagine that on hearing all of this widely reported news many people would be put off downloading iOS 6, choosing instead to stick with iOS 5.

That hasn’t been the case though with a report today telling how iOS device users can’t seem to wait to upgrade to the latest OS. In fact as more negative news has come out the adoption rate by iPhone, iPad and iPod touch users has still risen quickly. As TechCrunch reports, analytics firm Apsalar has released figures showing that after the first two days of iOS 6 being released the adoption rate was up to 20% from a 5% adoption rate after day one. Even more telling perhaps is the news that iOS 6 is being taken up more than twice as quickly as iOS 5 was over the same period. iOS 5 was adopted by 9% of iOS device users after two days while iOS 6 had been adopted by 20% of devices over the same time. 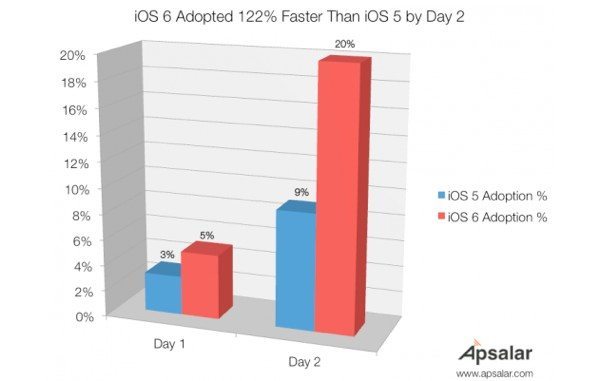 In case you’re looking for flaws in the figures and are maybe thinking that only a small sample of devices were considered in the survey we can tell you that over 6 million devices were taken into account for iOS 6 data and over 2 million devices for iOS 5 data. Of course we should take into account that one of the reasons for a faster uptake may be the ease of newer OTA updates .

Although there has been a lot of talk of negative points about iOS 6 we feel there must be some users who are enjoying some of the new features and improvements and we’d like to hear from readers about this. Do the figures above reflect your own experience? Have you been deterred from downloading iOS 6 because of all the criticism or did you update quickly regardless? Are your initial impressions of the latest operating system positive or negative? Let us know with your comments.

7 thoughts on “iOS 6 criticism doesn’t deter users, far from it”