Nexus 4 and problems within

The LG Nexus 4 smartphone, also referred to as the Google Nexus 4 has been making huge waves since its release earlier this month. Being the latest pure Android Nexus handset we always knew this would be hugely popular and it sold out within hours, with new stock still being eagerly waited for. However although it’s an impressive phone it has seen some teething problems so it hasn’t all exactly been plain sailing. We’d like to know if you’ve experienced any problems with your Nexus 4?

The Nexus 4 is available through the Google Play Store in an 8GB version and 16GB version. Unfortunately the phone is still out of stock and there’s not even an option to place an order for a later shipping date. This is one of the first problems that the Nexus 4 came up against as the lack of availability has led to a certain amount of frustration for potential buyers. It’s a shame that the huge demand for the phone was its first minor downfall. On the one hand we expected the phone to be popular, with high-end specs and a very low price but its own success has led to consternation among the many consumers still trying to purchase one.

It’s also a shame that Google hasn’t come up with a product page where potential purchasers can sign up to receive notification of when the phone arrives back in stock as it’s asking a lot to expect people to be constantly hitting the refresh button to see if it is available yet. We recently informed readers about a free app which claims to check Nexus 4 stock for you to save you continually looking but we were wary of the amount of data it might use and it didn’t appear to be working in the UK, although you may have found otherwise? 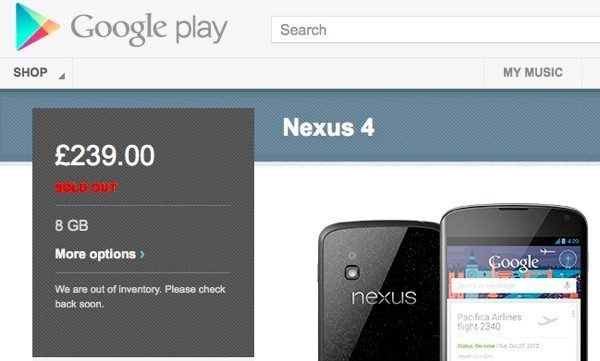 Shortly after the release there were also some claims that the Nexus 4 might be beset with a purple flare problem when using the camera, similar to an issue that affected the iPhone 5. However although there were various reports about this it doesn’t seem to have become a major issue and none of our readers said that their handset had the same problem, so this one was most likely an isolated incident.

Following this we reported several problems on the Nexus 4 arising from the new 4.2 Jelly Bean update. We told about several Jelly Bean issues and bugs affecting different devices and informed about a list detailing each issue and which devices had been affected by it. One of the problems was random rebooting and instability and at the time we wrote our article there were reports of this affecting the Nexus 7, Nexus 10 and Galaxy Nexus. However since then the Nexus 4 has been added to the list of devices experiencing this problem, with owners of the Nexus 4 reporting this issue. Another issue that now also seems to be a concern is that some Nexus 4 phones are experiencing fast battery drain and another setback that has affected all Nexus devices with 4.2 Jelly Bean, including the Nexus 4 is with the camera app. Of course these problems are specifically because of bugs in 4.2 Jelly Bean and affect other devices but these are still problems that the Nexus 4 could do without.

Yesterday we told of another specific Nexus 4 concern and this one does appear to be quite widespread with many forum mentions about an earpiece problem. Many people have flagged this issue on the Google Android Project site and it seems that some users are experiencing a clicking, buzzing or otherwise distorted sound from the earpiece or camera area. Whether this is simply a faulty batch or more serious than that isn’t yet known but it seems that some people have noticed this problem while their friends who also have the Nexus 4 haven’t spotted it. What is more worrying about this reported issue is that it’s thought more likely to be a hardware issue rather than something that can be solved with a software fix. It will be interesting to see when and if Google has to say anything about this. 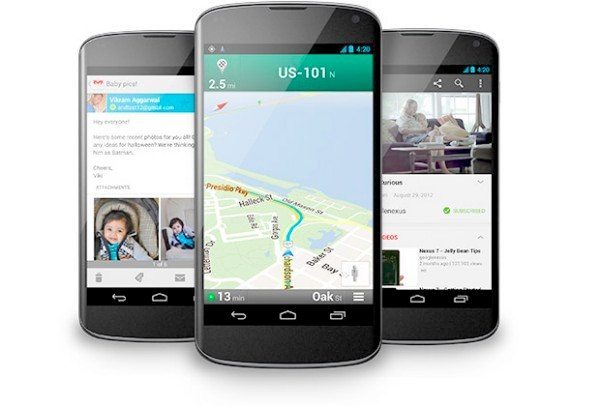 Another drawback for the Nexus 4 is its small amount of internal storage and lack of expansion via microSD and another snag for some is its lack of 4G LTE connectivity. A recent teardown showed the Nexus 4 is actually equipped with a 4G LTE chip and a tweak has been used by some people to enable use of LTE with the Nexus 4 but only for areas using LTE band 4. We should point out though that lack of LTE connectivity doesn’t bother everyone.

Readers can see then that the Nexus 4 isn’t without its flaws but this can often be said about a newly-released product and we’ve received comments from readers saying that they hold off purchasing a smartphone the moment it has been released because there are invariably some issues that need ironing out. It may seem from the above that we wouldn’t recommend the Nexus 4 but that isn’t the case. Reviews for the Nexus 4 have seen the device receive high praise and we recently included it on our pick of some of the best smartphones for the US holiday season because of its top-notch specs and low price.

It would be remiss of us though to gloss over the fact that some problems are apparent and we would like to hear what readers feel about this. Are you already the owner of a Nexus 4 and have you experienced any difficulties yet with your brand new smartphone? Would any of the above problems put you off purchasing the second wave of availability of the Nexus 4 or perhaps you feel that with any device sold in huge numbers, some are bound to be flawed? Maybe you have nothing but praise for the Nexus 4? Send your comments to let us know.

37 thoughts on “Nexus 4 and problems within”