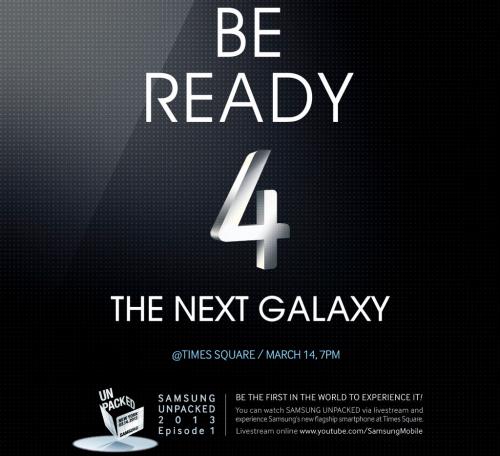 The rumour mill is gathering pace in the lead up to the big revealing of the new flagship smartphone from Samsung, whether it is about the specifications of the handset or the software features it will have. Now new reports feature some rumours about the different versions of the Samsung Galaxy S4 and the design of the handset leading up to its release.

While we have recently heard talk of the processor the handset will be using and other specs of the handset, there is now reports that the handset will come with three storage options at launch starting at 16GB and going up to 64GB. This is nothing new really as the Galaxy S3 was launched with the same options, although many regions never got to see the 64GB model.

This isn’t a problem really as Samsung normally provides a microSD card option to add a further 64GB of memory, which for most users is more than enough. It also seems that Samsung is ditching the pebble blue colour option as well with the Galaxy S4, as it is being suggested the device will launch in either white or black colour options.

In another report it is being suggested that the design of the Galaxy S4 will more closely resemble the Galaxy Note instead of the Galaxy S3, which has been speculated about in the past. Research analyst Charles Golvin told T3.com that while he doesn’t believe the handset will have a display above 5-inches, he does think the device will feature an all new design that is “more like the Galaxy Note 3 than the S3”.

Other improvements expected with the Galaxy S4 include improved battery life along with software improvements made to the camera, and also predicted front facing speakers to improve the audio on the handset, and are a feature on the new HTC One.

Another analyst, Ramon Llamas, has also told the website that the launch of the handset will “surprise and delight” smartphone fans, and won’t be down to just the specs of the device but the software features it will bring on top of Android.

Better use of the camera sensor beyond just taking pictures and improved S-Voice features are among those being tipped, but we will have to wait until March 14th to find out officially what Samsung is planning for the Galaxy S4.

Do you think Samsung has something special lined up with the release of the Galaxy S4?