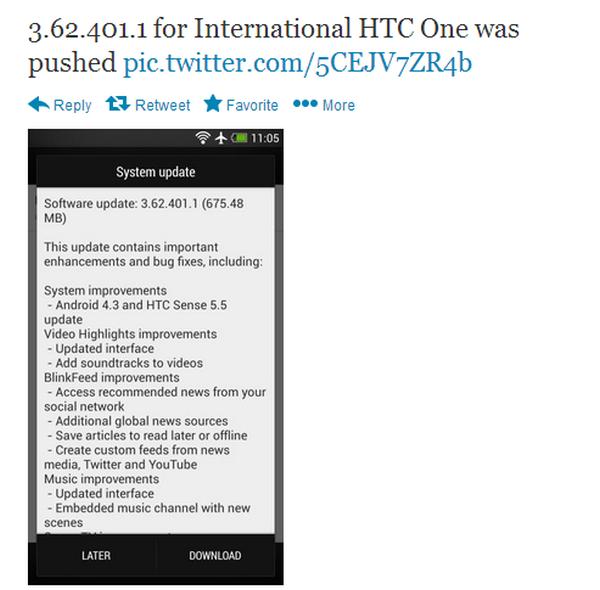 Owners of the HTC One over in the US have been receiving the Android 4.3 Jelly Bean update during the last few weeks, while many other regions watch on wondering when their turn will come. Now it seems that the International HTC One is now seeing the start of the Android 4.3 update rollout along with the HTC Sense 5.5 overlay.

A few days ago we heard that the Android 4.3 update should be reaching European users in the coming weeks, but now serial HTC tipster LlabTooFeR has taken to his Twitter account and provided the image that can be seen on this page along with the caption of “3.62.401.1 for International HTC One was pushed”

As you can see from the image it clearly shows the Android 4.3 and Sense 5.5 system update that contains a number of bug fixes and enhancements. It is not clear if this is release has reached many regions yet but at least it has begun its journey.

We have already seen some of the new features that HTC Sense 5.5 will be bringing to the popular smartphone in the coming weeks as the software moves along, while US users are thought to be treated to Sense 5.5 by the end of this year.

There will be many that hope that the purple hue problem with the handsets camera is addressed as it hasn’t so far in the US even after the Android 4.3 update has been downloaded and installed, with some reports that it has got even worse.

Have you seen the update yet?