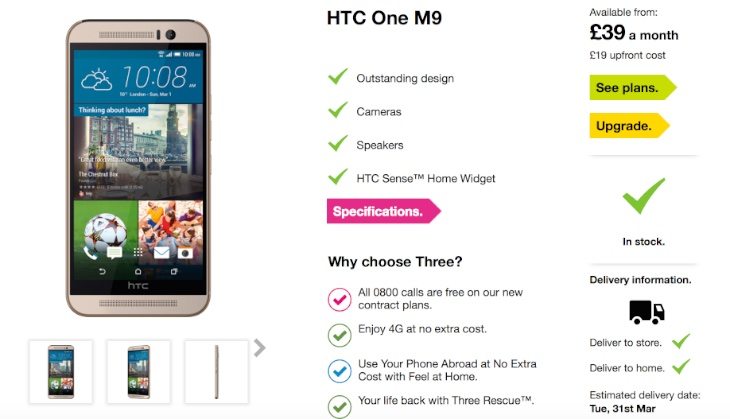 The HTC One M9 is about to release for various global markets, and if you’re in the UK and want to buy this phone we’ve already brought plenty of information. We knew that the Three network would be offering this flagship device, but previously hadn’t heard about pricing. Now we have news of HTC One M9 Three UK price plans and the phone is on sale right now.

Early this month we reported on where to buy the One M9 in the UK, and following this we also gave details of Carphone Warehouse prices and plans on EE, O2 and Vodafone. Now the phone has gone up for grabs on Three. It’s showing as in stock with an estimated delivery date of March 31st.

Various contract plans are available such as one that involves an upfront cost of just Â£19 and then monthly payments of Â£39 for 24-months. That will get you unlimited calls and texts and 1GB of 4G data. If you want more data another plan also requires a Â£19 upfront payment and then monthly payments of Â£42. This plan also offers unlimited calls and texts but this time you get 2GB of 4G data. Yet another option is unlimited 4G data with unlimited texts and calls, and this also requires a downpayment of Â£19 and then Â£47 monthly.

This smartphone is available from Three UK in Silver/Rose Gold or Gunmetal Gray colour choices. If you want to find out much more about the HTC One M9 you might like to check out our specs comparison of it against the Samsung Galaxy S6, or our recent review collection showing different perspectives.

Have you set your sights firmly on the HTC One M9, and if so will you order it through Three UK? Maybe you’re still trying to choose between this phone and another top handset? Drop us your comments in the box below.