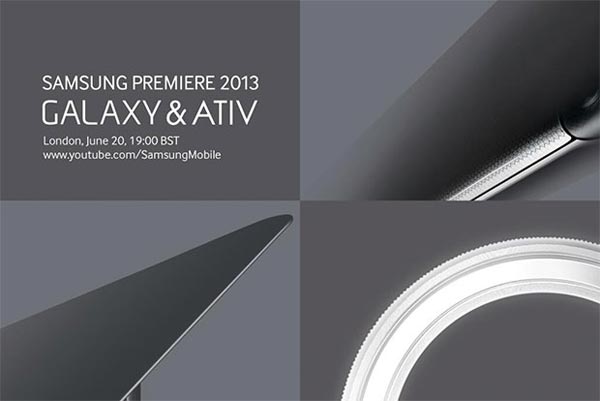 There is more rumor than solid news for Samsung Premiere 2013, an event set for June 20 at 7PM in London. It is exciting for technology enthusiasts that follow this brand, but most of us wonder what will launch next week? There’s not a lot left other than the Samsung Galaxy Note 3, Note 12.2 or Camera 2.

We touched on the Samsung Galaxy Note 3 release date rumors a few days ago and how some blogs keep contradicting themselves from claimed insiders, and while the Galaxy Note 3 is widely expected to release in September it seems a lot of fans are hoping for something sooner.

September might be the more realistic launch date for Samsung’s Galaxy Note 3, but as one reader put it “they seem to change release dates to earlier points a lot”. This is obviously more hope than fact, but the truth is no one really knows when the Galaxy Note 3 will arrive exactly other than Samsung. Although we did see what could be a Galaxy Note 3 prototype within the last week.

While we’d love to see the Samsung Galaxy Note 3 launch at Premiere 2013, in our opinion it will be IFA thanks to this becoming a familiar tradition with Samsung highlighting some of its most groundbreaking handsets.

Another possibility for the Premiere 2013 event in London would be Samsung Galaxy Camera 2, and this has been made more likely thanks to the Galaxy S4 Zoom being announced earlier today. It is also worth noting that one of Samsung’s CEO’s reportedly confirmed the Galaxy Camera 2 would be at the London event next week, although this hadn’t been through official channels. If the rumors about specs are real, then we look forward to seeing an over 20 megapixel camera.

Lastly, the Samsung Galaxy Note 12.2 is a rumor that surfaced at the start of this week. The new size of Samsung tablet would arrive with a stylus and sized at 12.2-inches. You can read more details on this rumored tablet in our earlier article, although in a nutshell it seems we could see a 2560×1600 native resolution and a launch at IFA, but we shouldn’t count out next week’s event.

What would you like to see launched at Premiere 2013, and do you think it’s too soon for the Samsung Galaxy Note 3? We might even see a new Galaxy device that no one has even heard of before; leave a comment with your thoughts. Earlier today we saw some hints towards the Galaxy Note 3 specs through S4 certification.